A downloadable YunokiRoom Memory for Windows, macOS, and Linux

Yunoki Memories or YunokiRoom Memory, is a visual novel made by one of YunokiRoom's producers, Maple Channel (めいぷるちゃんれる). Follow Sakura, a middle school student  who gets her wish for you to be her boyfriend granted. A life of Anime and Slice of Life are waiting for you in this game!

Sakura Kirishima is an average 14-year-old school girl, who have recently moved to Kanagawa Prefecture with her older sister Rena Kirishima, attended a school there in Gunma Prefecture, her birthplace. Her birthday is October 16th, 2004.

Nana Kishimoto is the flirty 15-year-old schoolgirl and is childhood friend of Sakura Kirishima since when they're elementary school kids. Nana also wants to be a manga artist like her, she also helps her flirt with her crush. Her birthday is January 10th, 2004.

Rena Kirishima is a smart 20-year-old photographer, who is Sakura's older sister. Rena is actually strict with others except for her younger sister Sakura who she only loves. Her birthday is Feburary 14th, 1998.

Mai Suzuki is a cheerful 11-year-old rabbit, who is a fragile and a gothic emo who is dressed in Lolita. Mai also brings good luck to Sakura when she is a rabbit. Her birthday is November 20th, 2007.

Risa is Sakura's pet cat who always follow her each time. Risa can be the most powerful cat of all the time.

Tera is a fairy that visits Sakura in her dreams. She also follows Sakura too just like Risa who is a cat in the real world.

This is Sakura and Rena's evil grandmother, who is actually abusive and disrespectful to Kanagawa people.

Azure is Evil Grandmother's bodyguard and protector, who wanted to destroy Sakura and her friends.

This is Junko-sama, she is the daughter of Rena's half sister and is Sakura's half-cousin.

This is Himeko Nishimura, a former Japanese heavy-weight boxing girl.

Selenachan is Nana's boss at the Mapuru Cafe where she works there.

Sakurako is Sakura and Rena's forgotten sister, who was probably alone in Gunma Prefecture.

Tomoko Nishimura is literally Himeko's younger sister and a character from the "MapleStory 2" anime series. She is also cheerful as an elf. Her birthday is December 16th, 2003.

The titular protagonist and is the storyteller.

The creator of the YunokiRoom Universe.

NOTE: The game might not work if you have a Japanese language not installed on your computer. The only way to resolve the problem is set your computer's language to Japanese so you can play it. 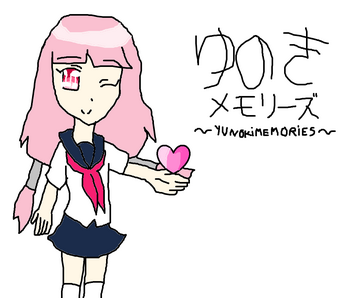